How to Avoid Bearing Failure

It is estimated the world will manufacture over 10 billion bearings in 2021, resulting in a market size of over 128 billion USD. 90% of those bearings will outlive the equipment in which they are installed. It is apparent that appropriate bearing lubrication is a critical consideration of mechanical design. This article discusses how Dicronite® dry film lubrication is often an effective solution for the 16.5 million bearings that fail due to lubrication problems.

Bearings reduce friction between two objects during rotational or linear movement. Reducing the friction enhances mechanical performance and efficiencies, allowing components to move at extremely high speeds and carry remarkable loads. Bearings are highly engineered, precision-made mechanisms found in automobiles, heavy equipment, robots, airplanes, computers, spacecraft, machine tools, refrigerators, and ceiling fans. It has been said if something twists, turns or moves, it probably has a bearing in it.

There are different categories and types of bearings distinguished by their purposes and design to carry specific thrust or radial loads. The most common type is a ball bearing. They vary in size and can handle both types of loads. The basic parts of a ball bearing include the: 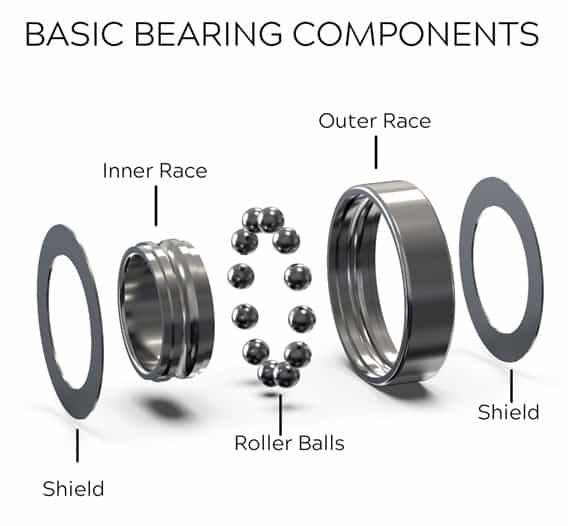 Shield: Prevents particles from entering the bearing and keeps grease inside

Inner Race: Mounted on the rotating shaft and tends to rotate the shaft.

Rolling Element “Balls”: The rolling element ‘balls’ will carry the load distributing it throughout the shafts.

Because these components are likely made of the same metallic material, lubrication is required in order to prevent the parts from galling, seizing, or extensive wear. Greases, oils, and/or solid lubricants are often specified by manufacturers along with the location, amounts and application methods required.

Not only is Dicronite® the global leader in WS2 coating services, it is also the premier dry film lubrication used to coat bearings. While a bearing’s function is to reduce friction within a machine, Dicronite’s function is to reduce friction within the bearing. By applying Dicronite®, engineers improve bearing performance and reduce friction-related wear. The impingement-applied modified tungsten disulfide compound can coat some or all bearing components. It is effective alone, or as a co-lubricant. Engineers often prefer Dicronite® over messy grease and oil because those traditional wet lubricants attract troublesome particles whereas Dicronite® is a dry, clean film that physically bonds with the substrate. Particles do not stick to Dicronite® coated bearings. Furthermore, grease and oil require space within the bearing mechanism, while the Dicronite® coating has a maximum thickness of .5 micron. Tolerances are not compromised with this thin lubricating film.

In order to determine if Dicronite® would extend bearing life, a major bearing manufacturer conducted 3 separate in-house test combinations. They measured and compared temperature and operating time from start to failure between coated and uncoated bearings. The test setup was as follows:

Combination #1: Standard Bearings on Both Sides 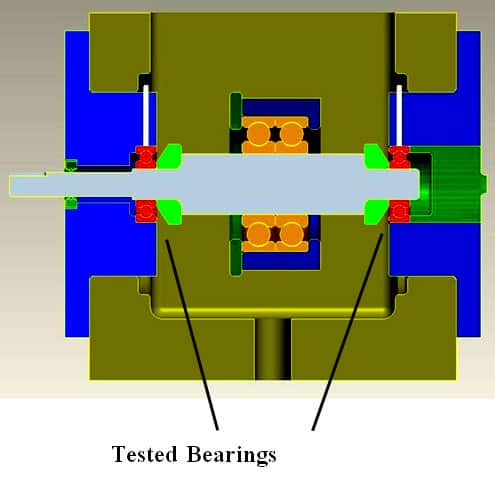 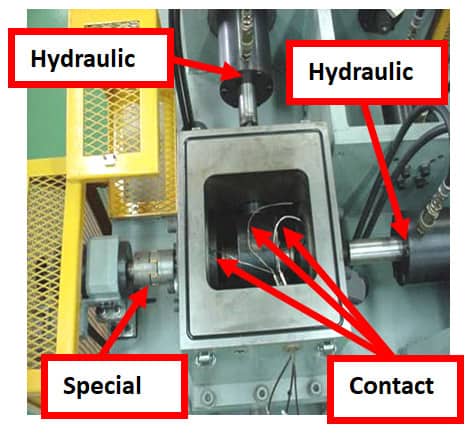 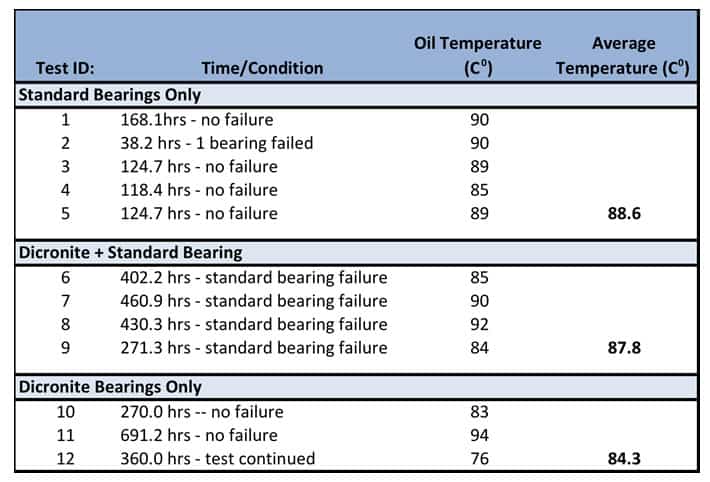 Dicronite® coated bearings were also tested under extreme pressure conditions and as a co-lubricant with 60W Racing Motor Oil and 90-140W Gear Lube. The tests aimed to determine the effect of Dicronite® on seizure load, weld point, and load-wear index. Test set up was for sliding-on-steel conditions using the Four-Ball Method (ASTM 2783). The following observations were recorded: 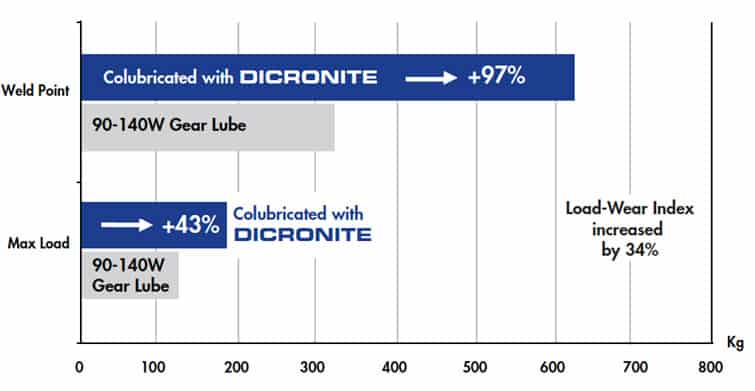 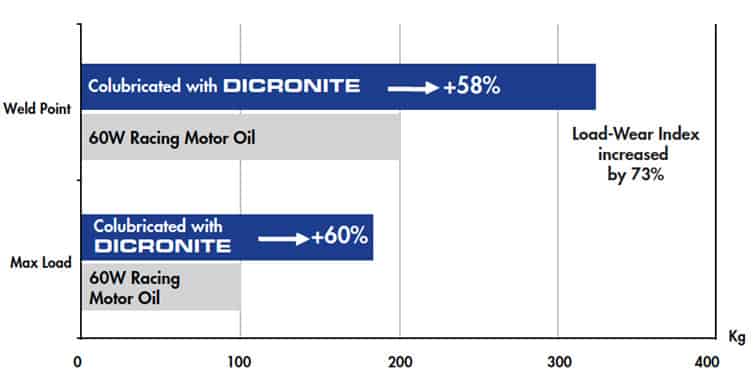 The performance of bearings under extreme pressure conditions, as measured by the load-wear index, is significantly improved by the addition of Dicronite® dry lubrication. Dicronite® also provides increased protection in loss of lubrication conditions as shown in the application report regarding military helicopter bearings.

As more and more bearing manufacturers discover the benefits of coating their products with Dicronite®, more and more choose to offer bearings pre-coated with Dicronite®. Such companies include Schatz Bearing Corporation, specializing in aerospace and custom bearings, Boca Bearing Company, concentrating in ceramic bearings, Pacamor Kubar Bearings offering precision and miniature ball bearings, and New Hampshire Ball Bearings, Inc. serving the aerospace, defense, high tech, and medical industries. If you would like to ensure that your project is not subject to one of 2021’s lube-related bearing failures, contact us today! We are happy to provide you with coated samples and assist with validation as needed.

Sliding wear occurs when two surfaces slide against one another causing material loss to one or both surfaces. Over time, this can result in component failures, additional maintenance, and costly down time.

Coating components with Dicronite® can help minimize this wear and reduce the need for maintenance and down time.

Dicronite® has an average thickness of 0.5 microns (0.00002 inch) or less. This precision thin film allows users to incorporate Dicronite® on designs with tight tolerances without the need for design or manufacturing changes.

Vacuum environments present a challenge for lubrication. Many conventional lubricants aren’t effective under vacuum and are largely vaporized.

Dicronite® can be used in vacuum to reduce friction where other lubricants can’t function. The outgassing of Dicronite® under vacuum conditions is well below screening levels for spacecraft materials per ASTM E595.

Dicronite® optimizes mechanical efficiency by reducing friction losses and can even work in tandem with existing lubrication to further optimize efficiency.

Dicronite® is especially useful in precision systems, extreme environments, or where minimizing size and weight is vital.

Fretting is a unique form of sliding wear that occurs when contact surfaces oscillate over a very small range of motion. Although it may seem minor, this surface wear can ultimately lead to fatigue cracking and devastating damage.

Dicronite® helps remedy fretting by providing lubrication at contact surfaces. This effectively reduces the wear and surface stresses that cause so much damage.

Dicronite® can be integrated into existing designs and assemblies without any other adjustments for seamless reduction of fretting wear.

Dicronite can be used in extreme environments to ensure effective lubrication while also being used in combination with oils and greases.

Dicronite is stable across a wide temperature range:

As friction in an assembly generates heat, elevated temperatures can result in unwanted operating conditions.

This can cause overheating and accelerate the breakdown of materials, resulting in costly maintenance and down time or destructive failure.