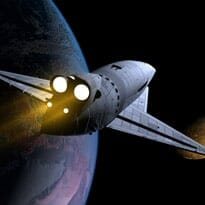 In 1962, President John F. Kennedy challenged a young U.S. program known as NASA to beat the Russians to the moon. Named the Apollo Missions, the project proved challenging to existing technology. A group of engineers lead by Robert D. Nelson was tasked with solving a critical system problem: How to lubricate intricate mechanical components for the lifetime of a mission in space’s extremely harsh environment. The answer was discovered when a relatively uncommon material, tungsten disulfide (WS2), was modified and applied to component surfaces using a revolutionary application process requiring no cure time, binders, adhesives, or carriers. The substance and application process was named Dicronite®, DL-5®, for its consistent .5µ thickness (‘Di’ for ‘½’, and ‘cron’ for ‘micron’). Robert Nelson patented Dicronite® in 1965, and its lubricity, thickness, and temperature/vacuum stability was paramount to the success of not only the Apollo missions, but many missions to follow. It is likely that Dicronite® has earned a seat on every US spacecraft to orbit our planet since.

Lubrication for space travel is quite challenging. Lubricants must perform when exposed to extremely low ambient pressures (vacuum level can range between 1×10−6 to < 1×10−17 Torr), extreme temperatures, a radiation and atomic oxygen environment, and contamination by vapors. Added to these challenges is the fact that mechanical components are largely not maintainable1.

While meeting space’s extreme requirements proves to be no problem for Dicronite®, the foundational question remains: Will it reduce or eliminate problematic friction? The answer is a resounding yes! It enables an ultra-low coefficient of friction and has prevented countless space missions from lubrication failure as proven by multiple missions’ successful return to earth.

Dicronite®’s space journey started in the early 1960’s with the Apollo missions whose charge was to take mankind to the moon and back – but it did not stop there. The Mariner Space Probes applied Dicronite® to the surfaces of the rovers’ sliding and rotating components as NASA launched a series of planetary exploration vehicles, collecting data on the planets Mercury, Venus and Mars. In addition, the Space Shuttle, International Space Station, Parker Solar Probe, and countless satellites have relied on Dicronite®’s proven success in space and used the tungsten disulfide coating on moving parts needing maximum lubricity and minimal friction and wear. Foreign space programs also rely on Dicronite®’s dependable performance in space, like Germany’s Max Planck Institute for Astronomy. They selected Dicronite® for both linear and rotational actuators in ground-based infrared detectors under cryogenic (-190oC) conditions.

Just as exciting as Dicronite®’s past missions into space are the future applications aimed to explore the final frontier. One such voyage is on the Europa Clipper, designed for the 2024 investigation of Jupiter’s moon, Europa. Dicronite® is specified on several components used as astronauts study the icy moon’s ability to harbor life-sustaining conditions DL-5® is also required on parts of NASA’s rotorcraft, Dragonfly. Dragonfly is the spacecraft heading to Saturn’s largest moon, Titan. Their 2027 mission is to “search for the building blocks of life” despite it’s -180° C surface temperature, a temperature proven to be within Dicronite®’s limits.

We are proud to be a part of the ongoing effort in all industries to improve performance, redefine limits, and advance new technology by reducing friction and wear within mechanical systems. For more information regarding Dicronite®’s use on spacecraft or any other mechanical system on this planet or another, contact us today!