The Mars Explorer Rover (MER) program’s two rovers - Spirit and Opportunity - were equipped for their January 2004 launch with a five degree-of-freedom, 1-meter long robotic arm known as the Instrument Deployment Device (IDD). The IDD positions instruments mounted to its end effector with greater precision than any previous Martian arm. Two dual-use caging mechanisms were designed for the IDD. The mechanisms are very small in size and act as launch restraints, as well as passive cradling (re-stowing) features during rover excursions on the Martian surface.

A mechanism was needed to protect the IDD during launch, travel and landing and release the IDD when required on the planetary surface. 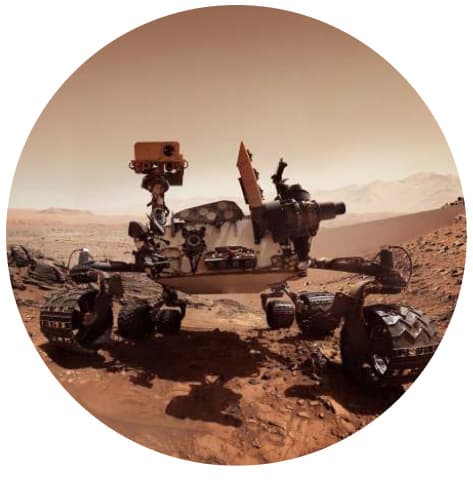 The resulting design relied upon pins engaging bushings, where the pin ends were radiused to mimic spherical bearings. Spherical bearings could not be used due to height limitations.

Initially no lubrication was specified; however, upon assembly, the sliding friction of the pins through the bushings was assessed to be too high. A wet lubricant was not used because low viscosity at the -120°C operational temperature could hinder latch release.

DICRONITE® dry lubrication met the required temperature ranges, with a functional temperature range of -188°C to +538°C, and was selected for lubrication of all sliding and rotating surfaces. Another key consideration was that DICRONITE®, at maximum 0.5 micron thickness, would not affect the mechanical tolerances.

DICRONITE® also played a role in mass reduction. The radiused ball ends of the pins, while saving significant weight over spherical bearings, resulted in very high contact stresses. The lubricating properties of DICRONITE® were used to relieve this stress and provide lubrication over the life the part.

According to NASA, since landing on Mars in January 2004, Spirit and Opportunity have not only succeeded in their prime objective of finding evidence of past water and an environment that could have been suitable for sustaining at least microbial life, but have chalked up one “first” after another in the annals of planetary exploration, rewriting all the books on Mars, blazing new extraterrestrial trails, and setting the standard for all other rovers to follow.

Sliding wear occurs when two surfaces slide against one another causing material loss to one or both surfaces. Over time, this can result in component failures, additional maintenance, and costly down time.

Coating components with Dicronite® can help minimize this wear and reduce the need for maintenance and down time.

Dicronite® has an average thickness of 0.5 microns (0.00002 inch) or less. This precision thin film allows users to incorporate Dicronite® on designs with tight tolerances without the need for design or manufacturing changes.

Vacuum environments present a challenge for lubrication. Many conventional lubricants aren’t effective under vacuum and are largely vaporized.

Dicronite® can be used in vacuum to reduce friction where other lubricants can’t function. The outgassing of Dicronite® under vacuum conditions is well below screening levels for spacecraft materials per ASTM E595.

Dicronite® optimizes mechanical efficiency by reducing friction losses and can even work in tandem with existing lubrication to further optimize efficiency.

Dicronite® is especially useful in precision systems, extreme environments, or where minimizing size and weight is vital.

Fretting is a unique form of sliding wear that occurs when contact surfaces oscillate over a very small range of motion. Although it may seem minor, this surface wear can ultimately lead to fatigue cracking and devastating damage.

Dicronite® helps remedy fretting by providing lubrication at contact surfaces. This effectively reduces the wear and surface stresses that cause so much damage.

Dicronite® can be integrated into existing designs and assemblies without any other adjustments for seamless reduction of fretting wear.

Dicronite can be used in extreme environments to ensure effective lubrication while also being used in combination with oils and greases.

Dicronite is stable across a wide temperature range:

As friction in an assembly generates heat, elevated temperatures can result in unwanted operating conditions.

This can cause overheating and accelerate the breakdown of materials, resulting in costly maintenance and down time or destructive failure.